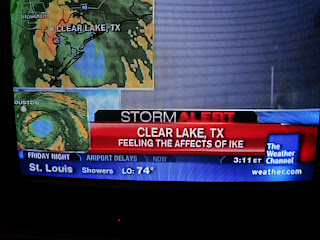 We wish those AFFECTED by Hurricane Ike a quick recovery from the damage and hardship inflicted by the storm.
Posted by Unknown at 8:54 PM

I feel your pain. Of course, there is a real and obvious difference between "affect" (a verb) and "effect" (a noun). This mistake in much the same way as those Republicans who insist upon using the noun "Democrat" when they need the adjective "Democratic," as in "the Democrat Senator from New York" or the "Democrat plan for the economy."
But the stickier wicket, and the one I would love to see you parse, is the use of "impact" when the word they are looking for is "affect." How about a column on that?

I miss TOWFI. Any chance of more blog posts? I realize your paying job comes before any non-paying blog or webzine, but anything you put up in your spare time would be wonderful. YouTube's HotForWords isn't nearly as informative as you guys are.

Hey, are you two coming back anytime soon? You are missed!

Hey, where is everyone? Aren't you two coming back?

i can't believe it's been a year since the blog was updated, and three years since the last zine issue. I hope you're all well, and that we'll see from you all again soon.

American usage is certainly very strange at times: "momentarily" to mean "in a moment" comes to mind. However, what about your own usage of, "There was lots of live video from Galveston and Houston, plus lots of glitzy graphics." "Was"? Don't you mean "were"? "Lots" is the plural form, after all. "There was a lot…," but, "There were lots…," surely?

Takoma Park:
No, the adjective "democratic" does not mean "belonging to the Democrat party", or at least that is not its primary and most widely understood meaning. I suppose that in writing, if you capitalize it in the middle of a sentence, you can get the reader to understand what you mean, but in spoken form there is no standard convention for conveying capitalization, and without that the listener will definitely get the wrong idea. Confusion will result.

In the case of the plan for the economy, you could use the plural possessive ("Democrats' plan"), but that doesn't work so well for the senator.

Most serious linguists have given up on the notion that nouns shouldn't be used adjectivally in English. It has become an accepted practice even in formal writing.

I'm still waiting for grammarians to stop trying to force Latin-style nominative-case predicate pronouns on English being verbs, despite the fact that they have sounded wrong to every single native speaker of the language for the last hundred years at least. (Just trying saying "it's I", "that's he", or "those're they" and see how people look at you. These constructions sound every bit as perversely ungrammatical as "Him go to store.")